Our mission is to be the Premier Volleyball Club in Charleston, WV and the surrounding area. Our goal is to increase the level of volleyball play in the greater Charleston area through specific player develop at each age level. We want our players to be impact players at their respective schools and go on to be impact players in college. We operate with the highest levels of professionalism and organization to create an enjoyable experience on and off the court. Vantage Volleyball prides itself in our passion and dedication to developing the whole volleyball athlete, specifically focusing and emphasizing on discipline, character, and leadership. The 2020-/2021 club season marks the 3rd season for Vantage Volleyball. It was started in the Fall of 2018 by Jenna Theden, current Head Women's Volleyball Coach at the University of Charleston. Jenna had dabbled in club volleyball in the Charleston area coaching a 17-American team in 2015/16 and directing development in the 2017/18 season. After becoming familiar with the club scene in Charleston, Jenna saw an opportunity to build a club volleyball program that would operate similarly to other prominent clubs in the nation.

The strategic plan for Vantage Volleyball involves keeping players in our club from age 10 to age 18, building each year on the foundation from the previous year. Naturally, the fulfillment of this plan will take a couple years to see the true fruition from the benefits of receiving training that can be built upon year after year. Player development, athletically and mentally, is the priority goal. We want to create and mold impact players. With over 17 NCAA collegiate volleyball teams in West Virginia, the Charleston area should be producing more impact players continuing their careers at these programs. We're on a mission to make this happen. We want athletes in our gym who want to play at the next level. We not only want them to get there, but make a difference wherever they go. Impact players not only need to be great volleyball players, but phenomenal leaders and teammates. Honing and mentoring leadership and behavioral competencies are also of the highest priority at Vantage Volleyball.

We are very excited about starting our 3rd season of club volleyball in these unprecedented times. The progress and development seen in our players from our first two seasons was superb. We are anxious to have many of those athletes back in our gym again and continue their development. We hope to see many new faces at tryouts and on our teams for the 2020/2021 season. 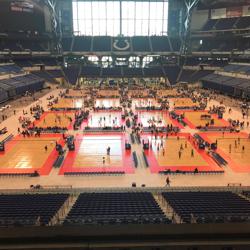 MEQ in the Indianapolis Colt's Stadium

WHAT IS CLUB VOLLEYBALL?

Club volleyball refers to USA Junior Olympic (JO) Volleyball, which is a highly organized, national competitive volleyball network designed to provide training and playing opportunities for young pre-college athletes. Club volleyball is an avenue for players age 10 (and even younger) to 18 to receive advanced training and competition on local, regional and national stages. Many volleyball clubs exist both locally and nationally, most composed of multiple teams. All of these clubs compete under the same rules laid out by our national governing body: USA Volleyball.

WHEN IS THE CLUB SEASON AND HOW LONG DOES IT LAST?

In the Ohio Valley Region (which includes West Virginia and parts of Pennsylvania) club season usually begins in early November with team tryouts and typically lasts until the Regional Championship Tournament in May. If a team qualifies for a National Championship tournament, these take place in either late June or early July.

MY DAUGHTER IS IN MIDDLE SCHOOL (OR EVEN YOUNGER). SHOULD WE PLAY CLUB NOW OR WAIT UNTIL HIGH SCHOOL?

Ultimately it is up to each family to make the decision that is right for them. However, volleyball is becoming more and more competitive. Players are picking up the sport at earlier ages and there is really no substitute to developing good fundamentals and game knowledge early on. Players who start early, 6th or 7th grade or even sooner, typically have a huge advantage over their peers who do not pick up the sport until later.

ARE ALL CLUBS THE SAME?

In the greater Charleston area, there are fewer than five volleyball clubs. Even though each must abide by the general rules and guidelines of USA Volleyball and OVR, each has its own set of policies, procedures and philosophies that are unique. It is important to make an informed decision when choosing the club that is right for you. At Vantage Volleyball, we encourage you to ask any questions about our club that are important to you. We have worked extremely hard to put together a club that our members can thrive in and be proud of, but we certainly understand that we are not for everyone.